Often holidays, vacations and adventures begin with a single (rather significant) purchase, the airline ticket.  Once obtained only through the handing over of an unholy amount of hard-earned cash and multiple visits to a travel agent, these days an international airline ticket can be purchased in under five minutes on the internet.  The term “ticket” is also a subjective term, it no longer consists of a small booklet of unidentifiable scrawl but a print out of your confirmation from http://www.cheapassairfares.com or wherever website it was purchased from.  Airline travel is as simple for most of us as clipping our nails… or farting.  Which leads me to the subject of today’s post; does the way in which we travel serve to lessen the impact of the experience?

In a world of fast cars, trains and planes, can remote destinations lose the mystique that draws us to them in the first place?  As we are all aware, first impressions count for a lot, so how we choose to enter another country bears some consideration.   While once a traveler’s first impression was wrought from the gauntlet of the dock, these days it is fashioned from the airport.  Speakeasies, cheap bunkhouse rooms, and swarthy sailors picking their teeth with knives have been replaced by chain restaurants, duty-free shops, and shoe shine stands.  I for one would rather contend with the former.  A friend of mine regularly travels to Eastern Europe on recruitment trips for his summer camp.  After returning from one of these 2 week marathons I once asked him about what he had seen while overseas. “Nothing much at all,” he replied, “mainly the inside of hotel lobbies.”  Having been on recruitment trips in the past I can attest to their worth concerning quality staff but am amazed at our willingness to travel long distances to lands so different from our own with little effort expended at experiencing them.  I can only surmise that the ease in which we travel has made us… well, lazy. 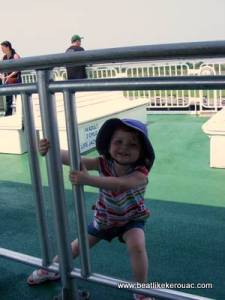 This was all brought home to me recently while traveling between two very exotic destinations: the great states of New Jersey and Delaware.  I, of course, did not fly but nor did I drive my car (as is the usual method of crossing state lines in America), but entered the wonder that is Delaware by boat!  Even in New Jersey people are generally unaware that a ferry runs between Cape May, New Jersey and Lewes, Delaware.   Driving down to the dock I found that I was absurdly excited by the prospect of this experience, I was actually giddy.  It’s not that Delaware is so different from Jersey, people still look the same, push in front of you in lines, and cut you off while driving.  It was the method of delivery that had changed, it was the boat! Arriving somewhere (anywhere) by boat is an event largely lost from the travel experience these days and this boat was something special; I was going to be allowed to drive my car on this one.  No matter how hard I try, loading a car onto a boat could never been called mundane, despite only moving it to Delaware.  Other advantages of boat travel include the ability to get out and walk around and have a beer.  This particular ferry received my lasting devotion by stocking their fridges with ice-cold (admittedly overpriced) Yuengling Lager.

In addition, ferries also have advantages to the traveling family.  Lily certainly had a blast running round the upper decks, playing with the other children, leaning out over the rail and contemplating a triple twist, one and a half somersault dive into the muddy Delaware Bay.  Parents, in between halting their children’s first tentative steps towards Olympic diving stardom were free to stroll around, stretch their legs and enjoy my two favorite weather conditions, warm sun and cool breezes.  On the whole it was a wonderful way to arrive in a new place and put me in a new frame of mind when contemplating the “First State in the Union.”  In preparing for our upcoming adventure  it did however leave me thinking;  would I have the same butterflies in my stomach, the same frisson of excitement (as Bill Bryson would say) upon arriving in say, Rome, by airplane as I would taking a ferry out to the Greek Islands?  Perhaps, but I like to think that travel is about the journey as much as the destination, and if that journey comprises only of being locked in a steel coffin with 650 other assholes then perhaps it is time to reconsider our chosen forms of transport.  I’m just sayin’!

1 Response to Planes, Trains and Automobiles – Oh… and Boats!