In Between Destinations – Pireaus

Posted on September 4, 2011 by Marcus Forster

Pireaus is Greece’s main port and the gateway to the Islands.  Arriving here on Saturday we looked out the taxi window and wrinkled our noses at the run-down buildings, disheveled appearance and itinerant, unkempt people who seemed to frequent every corner.  Pireaus is not a pretty town, nor is it a tourist destination, save for the port.  People coming here are always on their way somewhere else.  In this spirit we decided not to let our three days in Pireaus dampen our spirits and immediately took a stroll down to the docks.  Usually when one says, “down by the docks” images like swarthy sailors picking their teeth with the bones of dead comrades, transvestite hookers and dealers (both household furniture and narcotics) come to mind.  These were all in attendance to be sure, but along with them came Australian backpackers, wealthy mid-westerners, vacationing Germans and virtually every other nationality you care to name, all with cameras swinging, maps fluttering and ferry tickets sprouting from their pockets.  Standing there watching huge ferries glide in and disgorge their human cargo was transfixing.  When they departed, one was seized with the desire to run and leap across the void as they pulled away from the dock yelling, “Take me to whatever island you’re going to!”  Too bad, we will just have to wait until tomorrow and our slow boat to Paros.  Come to think of it, that sounds great, our “slow boat to Paros.” 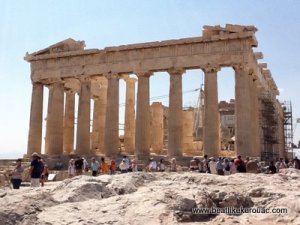 Seeking to placate our “Pireaus nerves” with some concerted sightseeing, today we rode a local bus into Athens in order to perform one of those pilgrimages that everyone should undertake, a visit to the Acropolis.  Standing on an outcrop above the city center, the Acropolis is the home to one of the most recognizable ruins in the world, the Parthenon.  Built by the Greeks before Jesus was a twinkle in Joseph’s eye (who are we kidding with the immaculate conception?) it was completed by a people without the benefit of machinery larger that a hammer and chisel, fossil fuels, or design systems like computers.  And yet it combines complex architectural touches, like convex columns to counter the optical illusions common on such huge buildings resulting in them looking like the mad hatter’s house.  To the Greeks, how something looks is very important.  The sheer amount of stone required to build the buildings was staggering, how did they get it all up there?  Slaves probably helped! 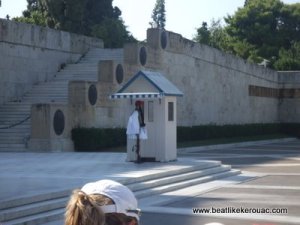 An Evzone - They stand very still. Aparently someone threw a firebomb at his little hut during the riots but the evzone never even blinked an eye!!

In order for Lily to endure the long, crowded bus ride into Athens a little bribery was required.  After  Windsor Castle and the Vatican’s Swiss Guard, lollipops, episodes of “Sid the Science Kid” and her puppy-dog, come second to the possibility of seeing a new set of soldiers.  For anyone familiar with Lily’s latest obsession, let’s just say we, as her parents, are very concerned that she may one day run off with a man in uniform.  The latest set of soldiers over which to continue this obsession are the evzones or Greek guard.  Their dramatic uniforms, complete with flouncy sleeves, red hats, “pompoms on their boots!” and slow, rhythmic stomping (I’d have to agree with Lily) might be the best changing of the guard yet.

Afterward, we strolled through the Sunday flea market.  Ashley passed about fifteen cheap handmade Greek sandal vendors before beating me into submission and obtaining a commitment for the purchase of a pair before we depart from the islands.  Lunch in the market consisted of Mosaka (a lasagna of eggplant, cheese and meat), Greek salads and olives, washed down with cold Greek “Mythos” beers. Ashley discovered that when a house wine is ordered they don’t just bring you a glass, but a full half-liter.  This made for a very interesting afternoon.  In spite of being “in between” our destinations, we are glad for this small break in Pireaus.  How could one come to Greece and not visit the Acropolis, wander through an available flea market and chat with some colorful local folk?  And Ashley has yet to buy her sandals. One less pair of shoes in our luggage and 15 Euros more in the bank account.

2 Responses to In Between Destinations – Pireaus