A Quick Visit to the Persian Gulf. 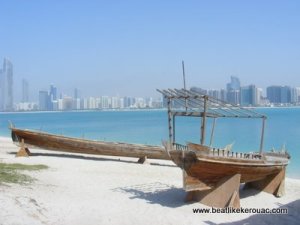 Geographically, Abu Dhabi is a conundrum.  Standing on the Corniche, sweating in the midday sun, I looked out over the Persian Gulf and thought, “that’s Iran over there.”  Iran is a country that still stones women to death for adultery, while behind me was an Arab city giving capitalism the proverbial “reach-around.”  Malls, shopping and luxury items are what Abu Dhabi lusts after, and actively promotes to the world.  7 star this, premium that, it’s like a giant construction zone with bits of Las Vegas scattered around, and each day that passes there is more and more of it.  I read somewhere that Abu Dhabi claims to posses more high-rise construction cranes than anywhere else in the world… NYC has the Empire State Building, Paris the Eiffel Tower, the United Arab Emirates’ capital has building equipment.

But these are not what distinguish Abu Dhabi from other international cities, it’s the heat that does it! Unbelievable soul sucking, enthusiasm sapping heat, that feels like a swift kick to the nether-regions whenever you walk outside.  It’s the kind of heat that would lead to questioning your life’s path if you were posted to the U.A.E for work.  Air-conditioning is not a luxury, it’s essential.  After twenty minutes outside my thin cotton shirt was soaked, as if I has just stepped into a shower, and myself and other tourists were the only people who looked like this.  Locals wore long sleeves and said “Oh, this is nothing, you should have been here in July when it was almost 50o C every day. This is nice weather!” 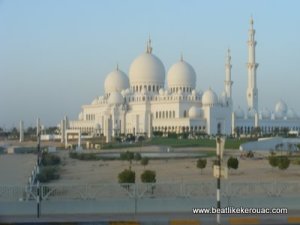 With all of this heat and development, genuine cultural experiences seem to be a bit thin on the ground, as the UAE is in such a rush to not be a “backward Arab state”.  Our most valued time was spent at the Heritage Museum where, in addition to credible reproductions of Bedouin tents, crafts and lifestyles, a Bangladeshi guarding one of the display rooms offered us a cup of Arabic coffee.  The coffee was boiled on the stove for ten minutes then spiced with saffron, cardamom seeds and rose-water.  It was wonderful… and strong at shit. As if to bring more weight to the style of coffee he had just served us he said, “it’s also good for the digestion eh!”  When alcoholic beverages (which are the usual cure-all for over-gustation) are a little thin on the ground I guess coffee is the default digestif of choice.

Evidence of Abu Dhabi’s Islamic background exists everywhere. Minarets dot every horizon (in addition to the construction cranes) and the call to payer can be heard occasionally throughout the day.  The television has a twenty-four hour a day Koran recital channel and a beer is still difficult to find.  Those Muslims might have developed arithmetic and early astronomy (besides much else) but they maintain a devoted avoidance towards “throwing down a few tinnies”, thereby assuring that they will never have a large influx of Australians to deal with.  Interestingly, many Australians on our flight from Athens were planning on catching another flight immediately from the airport, and abstaining from Abu Dhabi (pun intended of course).

Emiratis seem to be required to wear national dress much of the time.  Perhaps it’s the numerous posters of the ruling Emir and his underlings that stare down from lamp posts, walls and building sides that keep them all honest in their attire.  I had thought that the “giant image of yourself in victorious poses” was an affection only caught by despots and dictators, but the ruling family of Abu Dhabi seem to love what I like to refer to as, “Ghaddaffi chic.”  The Emeriti dress code distinguishes them immediately from visitors, “guest workers”, and other non-Arabic locals. The men all wear long white robes, small skull caps and the classic head scarf with black wrapping rope.  The color and style of which denotes your tribe… or perhaps the style of the day! Women are clad almost universally in black, the range of coverage depending on their (or perhaps their husbands’) religious enthusiasm. Some women drift along like a dark cloud, not a part of their body exposed.  Even a sheer fabric covers their eyes! Other women hem their abayas in golden thread, carry expensive handbags and adorn their hands and feet with elaborate henna and jewelry.

One unusual fact regarding the U.A.E is the disparity between Emirati citizens and “guest workers” who exist in numbers that consist of at least 50 percent of the total population.  I am not talking about European bankers and American hedge fund managers here, but hotel room cleaners, construction workers (who build Abu Dhabis skyscrapers in that interminable heat) and other workers in the service sector.  Riding from the hotel to the airport I asked our Sri Lankan driver about this curious situation.  In between telling me that despite Australia’s dominance of cricket the Sri Lankan cricket team was undoubtedly the “best in the whole world”, he told us that he had lived in Abu Dhabi for eight years.  Despite that time, and the fact that he paid taxes and supported the local economy with his well-earnt money he would never be eligible to become an U.A.E. citizen.  This understandably rankled him, and ruffled my feathers having been a “guest worker” myself.  He went on to tell me that Emiratis generally worked for the government in some administrative capacity and were afforded multiple grants from the government, just by being citizens. Money for getting married, having a child, buying a house, car or one of many other reasons was available to citizens, but not to the guest workers. This government policy is not fair. It is fair not to afford the same rights to resident aliens (spoken as a former resident alien myself) as are provided to citizens, but the workers should at least be able to apply for citizenship at some point.

As we dragged our bag through Abu Dhabi’s sparkling airport, past the Bvlgari jewelers, Prada, Versace, and Dior stores we tried to reflect on our brief stay in this unusual city. Tried, and failed! Abu Dhabi defies categorization, and perhaps this is its hallmark feature.  It is a city of contradiction, comfortable both with Shar’ia Law and Louis Vuitton. Go figure.

8 Responses to A Quick Visit to the Persian Gulf.