Ode on a Grecian Island

I doubt there’s any reason to feel that people need to be talked into visiting the Greek Islands.  For many, like me, they’re on the ‘bucket list,’ one of the destinations that must be seen before you die.  After a month of essentially living there, we’ve decided that there are a few special characteristics of the islands that are particularly noteworthy, the reasons we came to love them and miss them now that we’re gone.

The taverna; the essential Greek restaurant.  Outdoor seating is a necessity, if not the only option.  Like many other Greek businesses, tavernas seem to be open only in the morning, and then again after 7 pm until late.  The island towns are generally blessed with so many tavernas, choosing one becomes a tough decision.  We generally checked prices on a few essentials: the Greek salad, moussaka, a local beer like Mythos or Alfa, and a half liter of local wine.  Often some of the places with lower prices tended to have better food, usually because they, like many of the world’s greatest little restaurants, were located off the main tourist drag.  Our favorites were quiet, with wonderfully attentive service and a few local cats patiently waiting to eat any leftover fish heads or dropped French fries.  Most tavernas offered a plethora of freshly prepared dishes, often with local ingredients like deliciously red tomatoes, soft feta or other local cheeses, olives of all shapes and sizes, and various styles of wine.  Those specializing in seafood often advertised with the product itself: fresh octopus hanging on a line out to dry by the front walk, the day’s catch displayed in a cooler just inside the door, or a sign proclaiming “squid so fresh a two-year-old will eat it!”  That last one isn’t true but we did find that fresh squid is sweet, and only then will a certain redheaded two year old eat it, with gusto.  The locals have the skinny on fresh seafood, of course.  Our landlady Athena casually mentioned to us one day that she and her husband Spiros had, the night before, a bit of a hankering for some fresh sea urchin.  And, since they lived in the Greek Islands, the easiest way to get some was to simply stroll out to one’s boat, go adrift a hundred meters from the shore, spear a few urchins, and bring them home in a bucket for dinner.   Urchins were best eaten raw, she said and apparently the eggs were the tastiest part.  Sigh.

The general casualness of island life is definitely apparent in Greece.  You hear about “island time” in the Caribbean or other vacation lands of far, but the Greeks take it seriously.  Siesta is often recognized by all businesses except for the grocery store and the port.  I saw hours posted at a clothing shop “10am-2 pm, then 6-9 pm.”  I looked at my watch and realized it was only 1:40, and the shop was definitely closed, and had been for a while.  I had to smile at myself that a country in supposed economic catastrophe is unconcerned enough to keep its siesta sacred.  It’s all about priorities.

We were visiting in September, mind you, and I had to keep reminding myself that the season was beginning to wind down and the locals had had three solid months of constant tourism to deal with.  So they probably needed a few hours in the middle of the workday to hit the beach and unwind, as the weather was bound to get a little windy in the next few weeks.  I hate to use the word “weather,” as it seems so dramatic when describing the glorious air around us.  While various atmospheric phenomenon seemed to beat the rest of the world to a pulp in September of 2011, the Greek Islands were able to drift along in sunny, blue-skied oblivion.  We were grateful to be a part of their ignorance.

Fira and the old harbor

Along with beautiful weather, the Greek islands boast intoxicating beautiful landscapes. On tiny Antiparos, we were able to rent a quad and putter along the coast in the open ocean air to the ‘other’ town on the island, checking out all kinds of Greek dwellings along the way.  Whether they were tiny square cottages or villas like Tom Hanks’, they all had the characteristic white stone walls, blue (or sometimes green) trims, and arched doorways draped with pink and red flowering bougainvillea and twirling grapevines.  In town, the houses were glued together in a maze divided by narrow winding streets, with little staircases generally devoid of railings and hidden doorways devoid of numbers.  Of the islands we visited, I thought Paros had the nicest streets to wander, dotted with the best non-pretentious shops to browse.  (Pay no attention to Marcus’s silly rants from previous posts– Paros is a perfectly lovely island!) But how anyone could find a city address without local help is beyond me.

Out of town, the landscape quickly becomes quite severe, with low, spiky shrubs, rocky hillsides and dry, pale soil. It doesn’t strike me as remotely lush or fertile, but somehow the Greeks know how to turn some amazingly delicious vegetables out of it.   One of the most interesting things we noticed towards the interiors of the islands were terraced hillsides, some active with sheep herders and farmsteads straight out of the pages of National Geographic. But many other hillsides were barren, reminiscent of a subsistence agricultural lifestyle long past. The mountains themselves were definitely austere and faintly foreboding, but at the same time reeking of history and an ancient lifestyle still active in many ways today.   As we drove along in our tiny rental car, we passed shells of stone houses that once housed past generations of farmers, inter-dispersed with the occasional vacation cottage in the traditional style, surrounded by lounge chairs and beautifully-tended gardens, overlooking the turquoise waters of the Aegean.  The mountain towns lacked the glaze of tourism characteristic of the coastal villages, but that’s part of their charm.  Like many mountain towns, their serene and quiet lifestyle is worth a peek, offering a unique feeling of beauty and solitude. 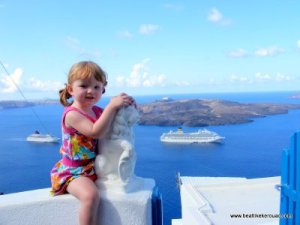 Of the many characteristics we came to embrace being on the Greek islands, the one most appreciated was the simplicity of life they offered.  We became thrilled by things that we might ordinarily take for granted, such as watching the accomplishments of a day’s work; several blokes standing around on a dock appraising each others’ catches, guys watching their neighbor paint his boat and advising from over his shoulder.  Good food and good wine are always appreciated, along with an Ouzo to wash it down.  Sitting at an outdoor taverna simply watching the gloriously clear water lap at the rocks of the sea nearby, or boats coming and going on water equally clear, watching the world’s greatest sunsets while sipping a drink or nibbling an appetizer.  Sitting on a beach with a good book (or digging in the sand, depending on your age) while the sun warms your skin.   The slowness of it all was so infectious, that by the time it came to move on, the wind had literally changed, almost as if it was thanking us for our time, while gently rustling us on so we wouldn’t be too sad to go, with a kind invitation to one day return.  Hopefully we can accept it.